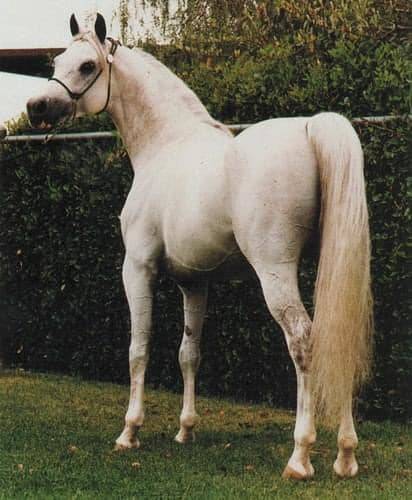 Reign on needs little introduction as a show horse or as a sire. His sire, US National Champion Halter and Park Horse *Bask++, and his grandsire, Canadian National Champion Stallion and US Top Ten Stallion and Stock Horse, *Bajram (by *Pietuszok out of *Bask's full sister, Bandola) were both imported and owned by the LaCroix family. It's Reign On's grand-dam, the Cal Poly matriarch and foundress of a dynasty, Sanibel (Sands x Farala by Farana) that sets him apart. In the show ring, Reign On with Allison Elwell, were the team to beat. Canadian National Champion and twice Scottsdale Champion Park Horse, Reign On brought the crowds to their feet, cheering on his effortless performance as the lord of the ring. His National winning offspring included: New Market +// (x Winterset by *Eter), TouchN Go CP+/ (x *Nitouche by Pohaniec), Celebration Plus+/ (x Holaday by Barbary+++), Pantheon (x Pantera by Cougar), CP Star Bright+/ (x Charm Eta by *Eter), the incredible Half-Arabian geldings Singin InThe rain+// and Pantheon and the full brothers, CP Tempest+/ and Carry On+/ out of the aforementioned Spring Fiesta. Then, there was Starr Llight. Sired by Reign On and out of an *Eter daughter, there aren't enough adjectives to describe her as a show horse. The recipient of NINE US and Canadian National Championships, FOUR Reserves and 12 Top Tens, all in a variety of Park and English Pleasure classes, Starr Llight is arguably the winningest performance mare our breed has known!